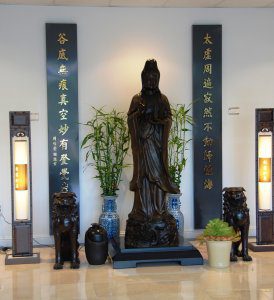 The American public is becoming increasingly interested in the ancient spiritual tradition of Zen Buddhism, known as “Chan” in Chinese, which flourished in China around 700 A.D. Since then it has provided the spiritual nourishment for countless people.

Zen Buddhism teaches how to attain inner peace and uncover the inherent wisdom, or “Buddha nature”, within each person. Becoming disillusioned with the emptiness of material gains, or ridden by stress and anxiety in the fast pace of modern living, many are turning to Buddhism, which takes the belief that people suffer because of the greed, anger, and ignorance in all of us. By probing into our own minds and understanding the nature of our afflictions, we can attain true inner peace, regardless of what happens externally. Zen meditation is one effective way that helps us achieve this goal.

To bring the Buddha’s compassion and wisdom to America, Grand Master Wei Chueh sent Ven. JianHu and four other bhiksus across the Pacific Ocean in October 2000 to establish the first overseas branch of Chung Tai Chan Monastery in the U.S. — the Buddha Gate Monastery in the East Bay of San Francisco. Under Ven. JianHu serving as the Abbot, the Monastery offered various classes and programs and soon found itself serving people from different parts of the Bay Area.

When the right conditions come together, the right thing is accomplished. This is the Buddhist teaching of Causality, or “Conditional Arising.” In response to the overwhelming demand for the teaching of Zen Buddhism in the South Bay and with the generous support of many disciples, Venerable Master Wei Chueh opened a new Zen center in the heart of Silicon Valley in April 2004 — the Chung Tai Zen Center of Sunnyvale. It is the fourth U.S. branch of Chung Tai Chan Monastery. Venerable JianHu, who has a doctorate degree in computer sciences and previous experiences in the high tech industries, moved from Buddha Gate to become the Abbot of the new Zen Center. In January 2012, the Grand Master WeiChueh and Ven. Master JianDeng, Abbot of Chung Tai Chan Monastery, appointed Ven. JianYing as the new Abbot of the Zen Center of Sunnyvale. 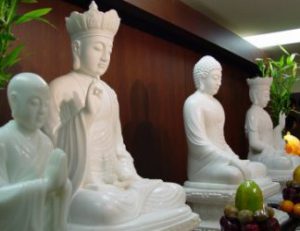 Since inception, the Zen Center of Sunnyvale has been a refreshing spring for the spirit, welcoming people of all cultures and faiths or no faith. In a tranquil environment, people learn the ageless wisdom of Buddhism, discover the joy of meditation, and uncover the “Buddha Nature” within all of us.

Soon after its opening, the demand for its classes and programs outgrew the space (a leased office in a commercial/industrial area), prompting the development of a larger and permanent Zen Center to serve the diverse communities in the Silicon Valley. With the generous support of many donors, the Zen Center opened a newly renovated 20,000 square feet facility in April 2007, offering a fertile environment of learning and practice. Located at 750 E. Arques Avenue by N. Wolfe Road in Sunnyvale, it is within easy access to Central Expressway, Highways 101 and 237, the Sunnyvale Caltrain station, and public transits.

For Admins’ and Volunteers