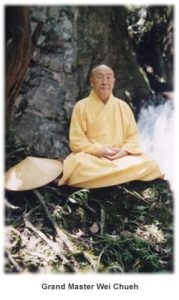 Grand Master WeiChueh was born in Ying Shan, Sichuan Province of China. In his youth he was educated in the Confucian classics and delved deeply into the study of Buddhism. In 1963, he was ordained under Master Lin Yuan at the Great Enlightenment Chan Monastery in Keelung, Taiwan. There he got up before dawn each day to clean the monastery hall and courtyard. While others were resting after lunch, he would remain in the Buddha Hall and prostrate mindfully. In all his daily duties and interactions, he was always devoted, caring, and diligent.

To further his practice, Grand Master WeiChueh went into solitary seclusion for over ten years in the mountains near Wan Li, a suburb of Taipei. Over time, as the area became more accessible, passersby gradually learned of the virtue and wisdom of this eloquent master of Dharma. His followers grew in number and many asked him to emerge from his mountain retreat to turn the Dharma Wheel (i.e., to spread Buddhism). The Master responded by building the Lin Quan Monastery at the very place of his retreat, expanding later to Chung Tai Chan Monastery in the town of Puli in central Taiwan. (And we refer to the founding abbot as the Grand Master to show our respect.)

The Grand Master, in adhering to the Buddha’s aim to teach the Dharma, to purify the mind of all defilements, and to promote peace, established meditation centers all over Taiwan as well as internationally. He strives tirelessly to carry the message of the Dharma and is frequently invited to lecture at universities and numerous organizations.

He conducts 7-day meditation retreats every year to help participants realize the origin of their own mind. In order to preserve the Dharma for future generations, he emphasizes Sangha education and established the Chung Tai Buddhist Institute to nurture knowledgeable and qualified teachers of the Dharma. He also founded the Pu Tai Elementary and Junior High School (with plans to offer education through the twelfth grade) to emphasize respect, compassion, and moral integrity in the education of youth.

Following the Grand Master’s guidance from Lin Quan to Chung Tai, the monastery has built a comprehensive and harmonious Sangha of bodhisattvas, and the essence (“mind Dharma”) of the Zen teaching have been deeply planted in the minds of monastic and lay disciples, which we hope will bear fruition in the rest of the world.

In May of 2005, the Grand Master passed on the abbotship of Chung Tai to his disciple JianDeng. Ven. Master JianDeng will follow the Grand Master’s compassion and teaching in leading the monastic and lay disciples of Chung Tai. By building and expanding on the firm foundation already in place, Chung Tai will continue its outreach in spreading the bodhisattva way with diligence and perseverance.