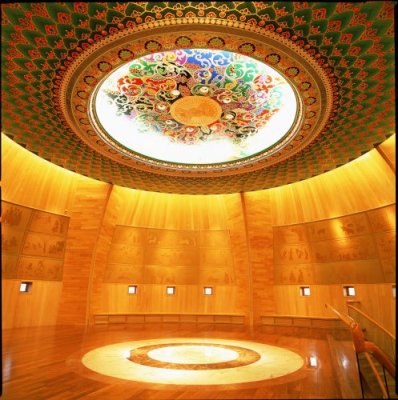 The golden dome on the apex of the Chung Tai Monastery represents the priceless Mani pearl, a symbol of the perfect and luminous nature inherent in all sentient beings. On top of the dome is the Dharma wheel made of 9 layers of circular plates vertically connected and supported by a pillar inside. This carries a two-fold representation of our Grand master’s vow to propagate the Dharma and the different levels of cultivation to attain enlightenment. At its bottom are 12 petals of the lotus flower, which emanate 12 rays of light at night, symbolizing the 12-fold chain of dependent origination.

The ceiling design is the “hand of Chung Tai” holding up a flower in the center, surrounded by concentric layers of elegantly lined lotus blossoms, symbolizing the propagation of the Dharma to all sentient beings, helping them find the path to their original nature.

Circling the interior wall are Han Dynasty-styled etchings that depict stories of the Buddha’s diligent practice of the “six paramitas” through many lifetimes. The six paramitas are six-fold perfections of charity, moral conduct, tolerance, diligence, meditation, and wisdom, ultimately resulting in the attainment of Buddhahood. Reprints of some of these elegant etchings are exhibited here.

《The Story of Deer Park 》

Once upon a time, there lived this Deer King, tall and handsome, with furs glowed five colors. He and his herd of thousands roamed free in the forest. One day, a royal king and his entourage discovered this forest ………

《Tale of a Sage’s Sacrifice to Save Tigers 》

Long time ago, a Brahman was living in the mountain, striving to cultivate Buddhism by not committing any sins and treating all sentient beings with great compassion. One day, the Brahman was searching for food ……..

《The Tale of the White Elephant 》

In a forest long ago there was a white elephant king with six tusks who led a herd of 500 other elephants. The white elephant took the Three Refuges and vowed to assist all sentient beings to attain enlightenment. He had two wives, ……..

《Self Sacrifice to Observe Precepts 》

This is the story of a sage who achieved the stage of srota-apanni (stream-enterer). In one of his past incarnations, his parents owned a slaughterhouse. They wished their son to inherit the family business when he grew up. But he refused ….

《The Sage of Tolerance》

Once there was an ascetic who cultivated deep in the mountains. He fed on wild fruits and spring water to live. Because of his ceaseless diligence, his mind was pure and free from all afflictions. One day, a king was hunting…

Once upon a time in a mountain, there lived a monkey who had great strength wisdom, and a heart full of kindness.One day, while this monkey was climbing a tree to pick some fruit, he saw a hunter …..

《The Story of the Nine-Colored Deer》

Countless eons ago, there lived a Deer King covered with a fur of nine colors, rare and unique in the world. One day, he rescued a drowing man from a river. The man was so thankful to the Deer King that he said, “I vow to offer you grass and water, and I shall serve you for the rest of my life.”…

《The Parrot Who Extinguished a Forest Fire》

The Buddha was teaching in a village and told the following story.Once a bamboo forest was on fire, and it spread quickly due to the strong and dry wind. The flames swallowed up everywhere in the mountain jungle, and was about to swipe away all lives there….

《The Tale of the Topknot Monk 》

A long time ago in a previous incarnation the Buddha was a monk with very, very long hair that he tied into a large knot on the top of his head, so he was known as the “topknot guru”. As a wandering monk he would stay in the city and, at times, alone in the forest for solitary cultivation…..

《The Samadhi that Overpowers the Thunder》

The Buddha spent his entire life traveling to all the kingdoms and villages in India to spread his teachings. One day, as he was heading from Kusinagara to Pravari city, he rested and meditated under a tree by the side of the road. His presence was serene and his mind was calm just like clear, purified water with no residue…..

《Selfless Offering to the Buddha 》

Once, a bodhisattva was born in the Brahma Kingdom and he was known as the “Scholar Youth”. His knowledge was so deep and diverse that his master sent him traveling to all four directions to teach others….

《Seeing the Six-realms from the Buddha’s Eye》

Prince Siddhartha had attained enlightenment after 49 days of meditation under the bodhi tree. He used the Buddha-eye to observe the sentient beings’ karmic behaviors in the six realms of rebirth, in order to better facilitate the proper ways to guide them to liberation………